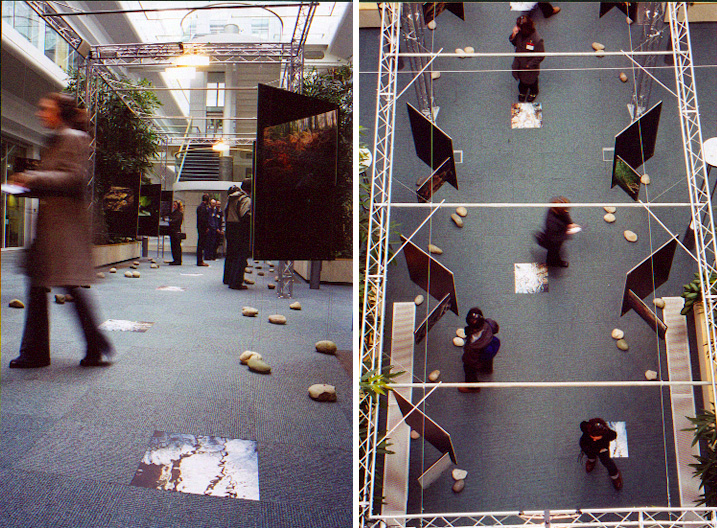 iDocs ‘the interactive documentary genre’ is a topic I’ve been keeping an eye on for a while, in part because some of the people involved are previous colleagues but also from the little I knew of it I suspect it’s something I might have been doing myself for a long time – or at least I’ve strayed into the margins. After unavoidably missing iDocs events over the last year or so I finally caught up with a session at the recent Encounters  Festival.

The definition of an iDoc seems fairly flexible and includes moving image – with the potential through the use of HTML5 to link individual frames of movies to other content – but also sequenced or collected still images with sound tracks, an area I’ve explored in a number of ways over many years.

Ever since I took up photography seriously enough to develop and print my own negatives – mostly of places/landscapes rather than people – I was often dissatisfied with the options for showing the finished results, and for viewing work made by other people. The black and white photos, often of uniform size lined up with military precision on a white wall of a gallery seemed to suppress the individual content by sheer volume.

I began making small books (a thoroughly fiddly task before digital photography), and then abandoned the idea delivered at college at that time of the ‘essential’  image and began to produce montages from printed photographs, even more fiddly in a different way but I was concerned to find a way of expressing and conveying to other people the experience of a specific place – it seemed important, and still does, though I’m not sure why.

These pieces had a kind of wobbly linear narrative to them but essentially each was a multi-faceted story of a place with variations of time or weather and began with domestic content, shifted into a combination of the family and the outside world and eventually discarded most visible traces of the personal and focused on trying to identify the qualities of place from the material specific to the location that lay in front of the camera.

Parallel to these were experiments in non-linear narrative production with artists’ group Ship of Fools using the innovative (two decades ago) CD-ROM platform. It’s interesting, and amusing, to hear the same debates now at the iDocs session around authorial voice, branching narratives, and user experience etc that we were avidly discussing in the mid 90s.

The Ship of Fools projects I was involved with were focused on reinterpreting mythological themes but the potential to create alternative versions of the same story were new to me and fed into how I approached my own landscape/place based work such as the Woods project that I’ve been immersed in for many years. This project displays a range of some of these methods and techniques – from an exhibition emulating a walk through the woods and the seasons to the ‘interactive artefact’  – the artist’s book of Sticks, Signs and Leaves, via the Wired Woods – the interactive, audio-enhanced, located media installation with HP Labs that was part of a Mobile Bristol research project – Mobile Bristol being a forerunner of the Pervasive Media Studio in Bristol.

And then there are the digital storytelling workshops (with Watershed and Theatre Orchard) and citizen journalism projects I’ve been working on for some time as a facilitator/producer. In the citizen journalism workshops the participants, using smartphones, each provide their own perspective on a specific event or theme contained within one blog eg the Olympic flavoured Weymouth Media Camp and the more recent Bristol Mayor Watch project.

Looking back at all these variations on documentary outcomes and activities that I’ve been pursuing over years and years suggest that it’s time I reinstated some conversations with others taking the same route, or probably routes!