Ten years ago, I was commissioned to create a poster to help mark the 20th anniversary of Bristol’s twinning with Oporto/Porto in Portugal – one of the nicest commissions I’ve ever been asked to do! I had proposed the idea to the Twinning Association way back in the 1980s and it lay dormant for a long time, but the anniversary provided an opportunity that I jumped at. The original poster (see end of post), created in Photoshop and Illustrator, was made up of half photographs from Bristol and half from Porto comparing similar features in each city; the background was created by adapting photographs I took of the surfaces of each city’s rivers, the Avon and the Duoro, the shapes of which, as they travelled through each city, also divided the poster into the Bristol side and the Porto side.

As with all my montage posters it took a long time to make and there wasn’t space to include all the photos I wanted. Following on from my recent post about algorithms, I thought it would be interesting to feed some of these images into the Collage software and see what it did with them, compared to my arrangements on the poster. The photographs I’ve used are just the Porto set that were used in the poster but with a few additions from those I’d not had room for initially.

So, by way of marking the 30th anniversary of the cities’ twinning here are four versions of layouts, created in a few seconds – the (relatively) most successful of the four is at the top of the page with the original poster at the bottom – see if you can spot the unfortunate accidental duplication in this print version – Bristol’s one-time lead-shot tower should have been in the smaller space; one of the hazards of juggling multiple images on screen. You can see more photos of Porto on my this flickr page.

As I said in the previous post this process is a useful way to create a quick visual display, however, scale, colour and texture within each image are immaterial in this procedure, but their relationship to each other is an important aspect of my layouts. And there are no threads of narrative to give coherence and balance – the clusters of different architectural styles; grouped images depicting varied transport; the drift downriver from city to the coast; juxtapositions and scale shifts of small details of food with market stalls, or close focus on street furniture with larger buildings – all these elements are what takes a long time to piece together to try to convey the sense of place but in the ‘instant’ version they’re all jumbled up. But hey, it’s fun to play with and makes me realise that what I do so painstakingly does demonstrate some level of skill that strings of code can’t replicate however smart they are. 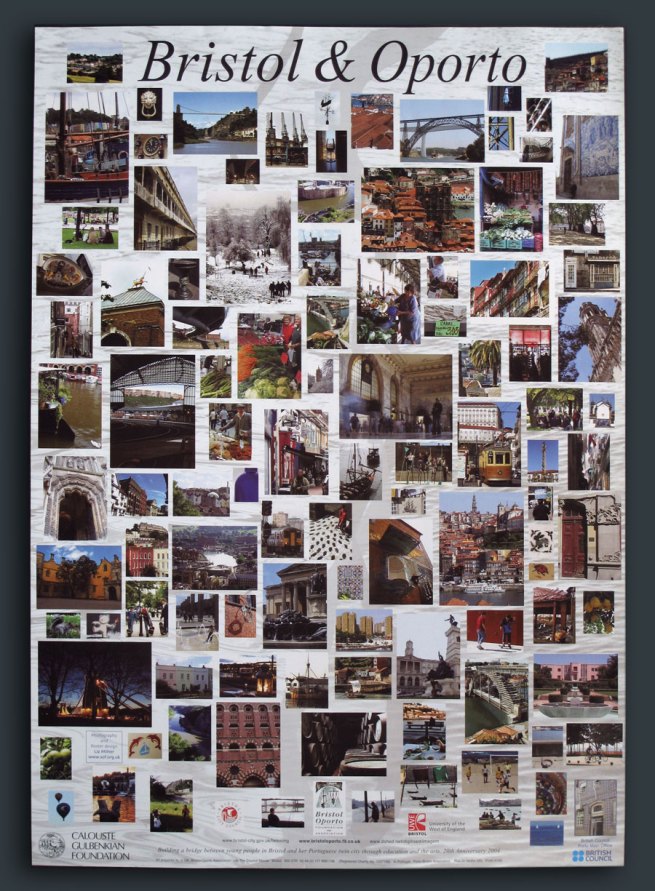