Now that I’ve invented an excuse for posting inconsequential items about place within this new ‘placescapes‘ theme here’s a throwback to September 2012 and a holiday spent largely in the Kent and Sussex area known as The Weald. I hadn’t set out to document this ‘touring holiday’ and I can’t remember why we chose to go there (apart from a middle-aged yearning to visit the gardens of Sissinghurst and Great Dixter), but it turned out to be a bit of a revelation.

Some places may have felt a bit over-preserved, others were just what you might expect in 21st century south-eastern England, with miles of bungalows and sprawling factory estates, but the remarkable variety of landscapes, architecture and attractions (both thoroughly cultural and comfortably unrefined) experienced over just 12 days led me to start posting photographs and notes on Facebook and Twitter using my mobile phone, and so it was that I made an accidental travelogue.  Enthusiastic responses from Facebook friends at the time led me to download the posts and photos when I got back and they’ve been sitting on my hard drive waiting for their moment, which has just arrived.

Because I made the posts on the phone they were brief and immediate responses to what had made an impression on me each day, and what became clear from the start was the wide variety of buildings, land use and scenery on display across the towns, villages, seaside resorts, coast and countryside of this small corner of England. The character of these landscapes was created – as it is in most places – by, initially, the geography, geology and climate with humans subsequently adapting to and applying the resources these elements provided, one outcome being the use of local materials for building.

But what was surprising was how much of this local distinctiveness had persisted over the years – through wars, agricultural and industrial revolutions, internal combustion engines, storms and global retailing, structures from over four or more centuries had endured. From the recent shingle-blasted wooden dwellings on the desert shores of Dungeness, timber framed houses with hung tiles in Rye, and the tarred weatherboarding of Hastings’ ‘Net Shops’ through to stone castles (Camber and Pevensey – we didn’t make it to  Bodiam unfortunately), grand houses made with local bricks like Sissinghurst, and flint walled barns in Cuckmere. These are just a few examples, you can see others in more photographs from this journey over on flickr.

Clues to how people found ways to survive in this landscape can also be seen in the towns and landscapes and although art galleries, museums, heritage and visitor centres are now sadly (nevertheless still of interest) more noticeable than fishermen, shepherds and tile-makers, there’s still visible evidence, and in some cases a continuation of some trades and skills – fishing along the coast, pottery making (in Rye – jugs a bowls vividly remembered from my childhood visits in the mid 1950s), and sheep farming on the chalk downlands.

Of the numerous and characteristic oast houses – for drying hops for beer-brewing – in Kent, there’s now only one left working (as part of a heritage centre I think), most have now been tastefully converted into unaffordable homes but the conical tiled roofs topped with white vents are still somehow comforting features to see at the edge of a village. A little charcoal-burning goes on today, but no large-scale glass, brick, tile or ironworking now – all once important industries for the economy of the Weald. There is though, evidence of more recent industry and technology in the looming nuclear power station at Dungeness, and its neighbouring wind farm, but a more inspiring evolution of technology, coupled with craft, was the new gridshell structure at the Weald and Downland open air museum, see photo below, that provides a note of optimism for developments that spurn the bland and anonymous (though probably cheaper) alternatives.

The use of local materials and different building styles are, in part, practical expressions of people’s relationship with the landscape, and, along with the residues of past human occupations (and new developments like the gridshell), have given many of the locations we visited a real resonance and a strong sense of place; I hope this post might stimulate others to visit too. Our journey began, inauspiciously, beside the M25!

It’s not everyone who’s lucky enough to start their holiday with an evening stroll alongside the M25!

View from the Tower, Sissinghurst

Vita & Harold did a topping job at Sissinghurst – White Garden & Cottage garden absolutely divine.  [Sissinghurst, once home to Vita Sackville West and Harold Nicholson – friends of the Bloomsbury set who pop up in a number of places through this holiday – see flickr photos]

Vita’s writing room in the Tower

After Sissinghurst  continuing travels in Lagonda coupe…if only!

Mundbryce, ligan, blodwit and fledwit, – exemptions from taxes and tolls allowed to our holiday location of Rye, leading to smuggling; but that was a while ago… To Hastings.

Hastings ‘Net shops’ (not for buying the white things you put in your windows) on ‘The Stade’ proper-job fishing terrain with all the anarchic/dynamic mess of making a difficult living, next to… 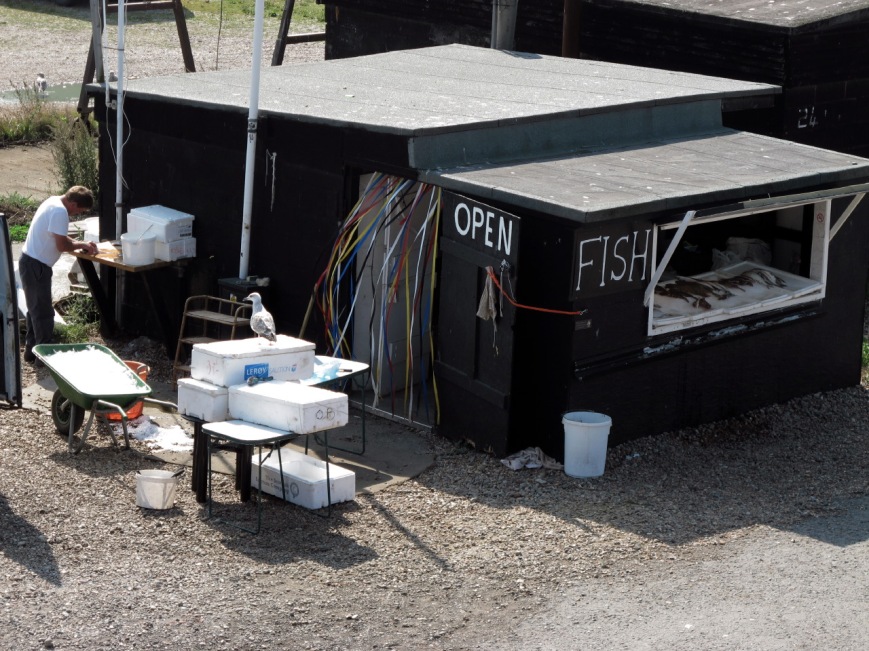 …Hastings dressed crab with samphire + Kent cider. And it was sunny all day. Good or what? 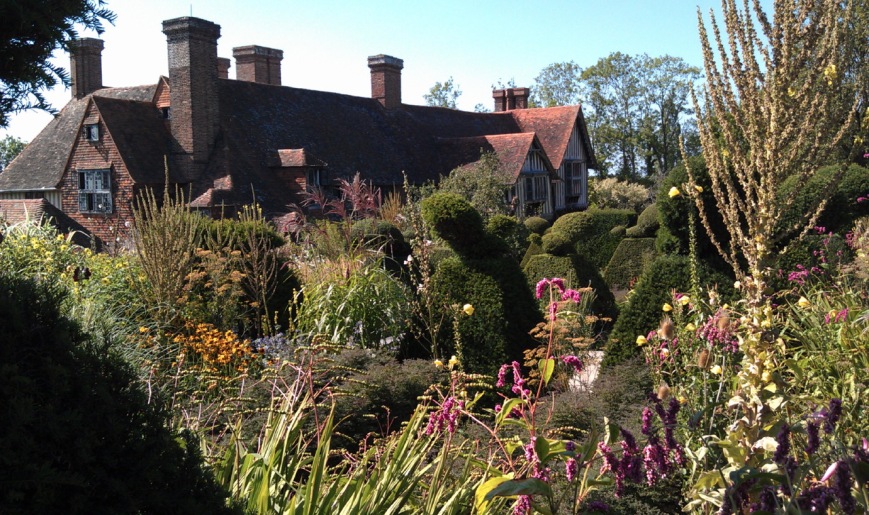 OK, it sounds really sad – going on a miniature steam train to a nuclear power station, BUT, going to Dungeness is like going to world’s end + beyond. It’s Britain’s only desert – shingle, evocatively named plants (vipers bugloss, horned poppy) some dolphins, lots of sky & light, black huts (one, Prospect Cottage, famously adopted by Derek Jarman who created a garden in empathy with the materials & landscape), working and abandoned boats, winches, nets & pulleys; lunch by the shingle-sucking waves with some small friendly wading birds. Then up in the lighthouse with views to the white cliffs of Dover + the French coast, + the light beautifully bent through Fresnel lenses. Steam train driver was mere slip of a smutty-faced girl! 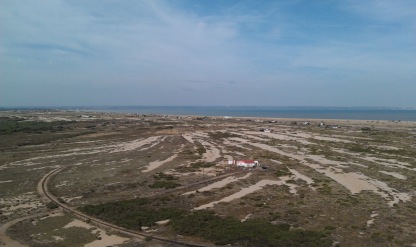 After a morning finally exploring the impossibly pretty town of Rye, we needed an antidote to the rich diet of tasteful antiques + shabby chic so hired bikes (first time on a bike for me in over 10 yrs) to explore marshes + the ruins of Camber castle. Built by the sea, it’s now in the middle of a field, guarded by sheep + dragonflies. Hot, sun-baked, windblasted + a little saddlesore, we ended the day at Camber sands, but couldn’t quite manage full sea immersion, paddling only, accompanied by critique of diverse beach architecture – there’s some pretentious edifices out there. Moving on to Bexhill tomorrow, childhood summer holiday territory. 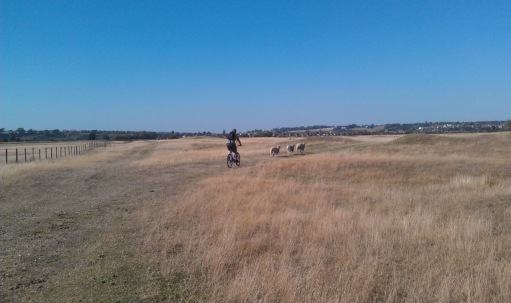 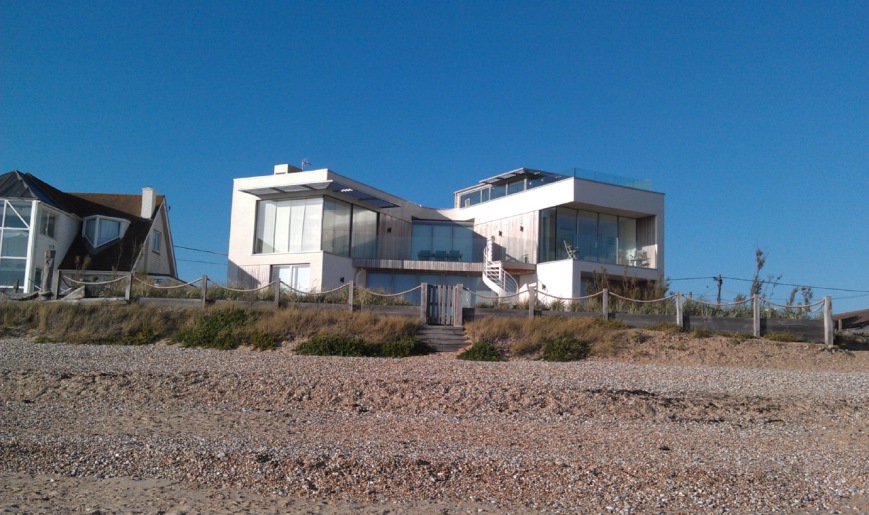 Today’s been a pilgrimage to childhood seaside holiday resort of Bexhill. Grandparents lived in this fairly charmless town for several years, no idea why + main memories are of terrifyingly large spider crab in museum, jellyfish like millefiore paperweights on the shingle beach + the oh-so-sophisticated Conti cafe with glass-topped, eau-de-Nile painted wicker tables (now gone) in the De La Warr pavilion.

On Bexhill beach – a long time ago

When you go back things are often smaller than you remember but both the crab + the pavilion were bigger. Restoration of De La Warr much publicised but frankly find it a bit lumpen and lacking finesse, good to see it again though.

After revisiting my own past, moved into my other grandparents’ lives with my first visit to Eastbourne, a favourite for them, quite refined, even now. New Towner gallery is a handsome building with some great work in its collection by Eric Ravillious, John Piper + Edward Bawden + an exhibition by Sussex artist, new to us, Harold Mockford.
So lucky with the stunning weather again, giving wondrously luminous visions of sea + sky. Eastbourne has very grand Victorian & Edwardian buildings, a bit like Hampstead on sea! 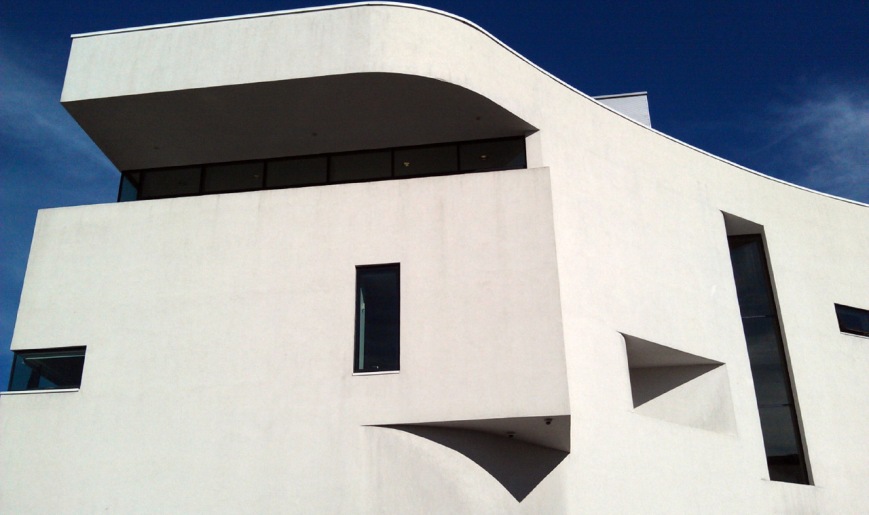 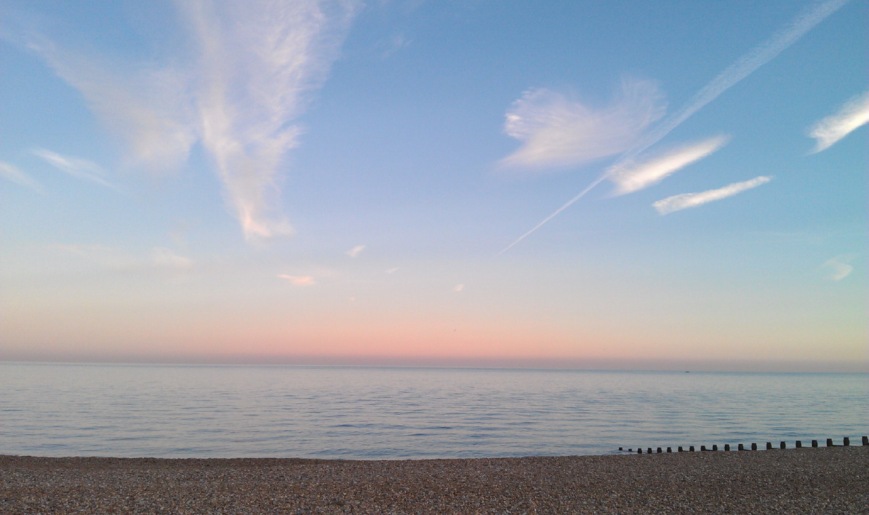 Here are 3 interpretations of neighbouring Cuckmere Haven by Bill Brandt, Eric Ravillious and me; strange treading the same ground as these ghosts.

More ghosts at Charleston Farmhouse, rural retreat of Bloomsbury set, near the enigmatic Long Man of Wilmington (chalk stick man), and across the valley from Leonard & Virginia Woolf’s house, Rodmell. All very artsy, as you’d expect – every surface decorated, some lovely, extraordinarily innovate designs for the early 20thC, some a bit strained + thin, but having spent some time researching Roger Fry + pals I found it oddly poignant too, especially visiting Virginia Woolf’s lovely garden writing room and then realising her suicide took place in the nearby river – not as cosy an existence as implied by their houses. As we left her ‘room with a view’ the weather changed, it rained and feels like autumn has arrived! 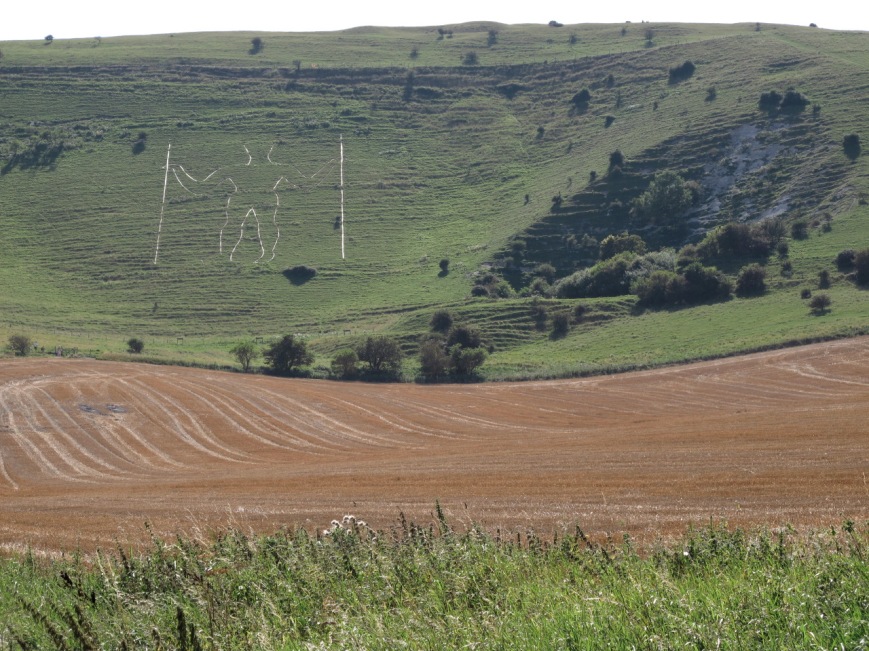 Making our way, very gradually back home, yesterday’s highlight was visit to the Weald + Downland open air museum – lots of salvaged buildings from the last 500 year’s or so reconstructed, but also this brilliant modern Gridshell structure made from miles of oak laths in a trellis, great combination of modern design technology + craftsmanship.

Last day today visiting friend who lives on Cranborne Chase – hoping to see hares on an amble round her home patch later. Breakfast with the swallows, followed by meander over Cranborne Chase’s quietly thriving villages with community shops, a farming co-operative and a wood-fired bakery. 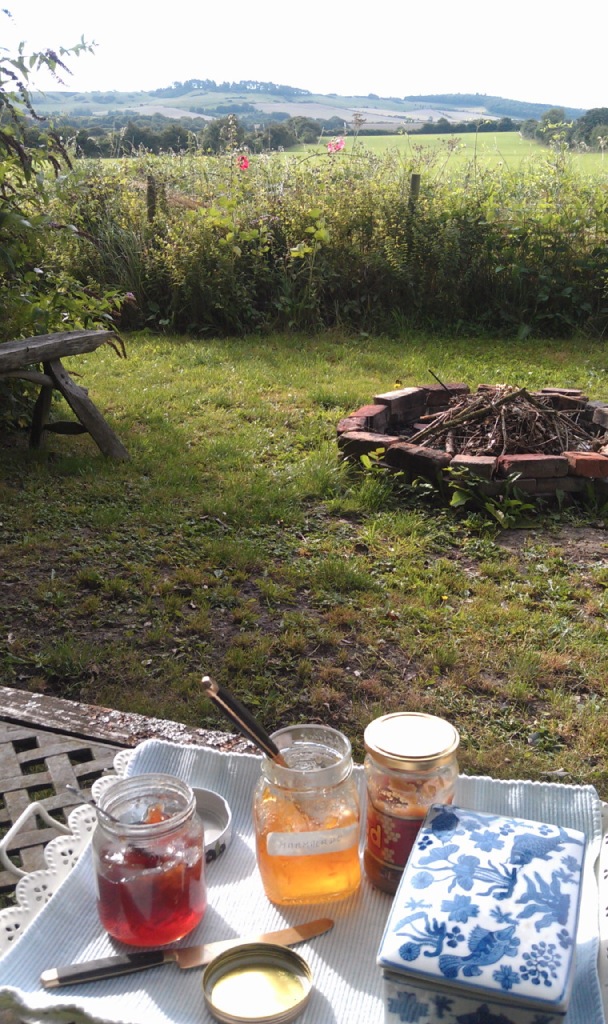 Picniced inside Knowlton circular Neolithic earthwork, where we were sheltered from wind by remains of flint + stone church that had appropriated the centre of the space in Norman times – a fine contrast to our next stop, Salisbury Cathedral. Always astonished by the immense spire, but mesmerized by a beautiful new feature inside – a water sculpture by William Pye.

Back to Cranborne Chase for meal of all locally produced food. And we saw two hares – always good to see hares! Back to Bristol tomorrow.