This mysterious, Christmas-coloured creature was a present from our younger son brought back from a gap year visit to Central America when he was 18 In the early 2000s. After impressive efforts to raise money for the trip he went away for 6 months initially doing some voluntary work on community projects in Costa Rica and Nicaragua, where he had a bit of a mixed time – helping build a medical centre in a remote settlement, being pursued through the jungle on a group night hike by an unknown creature, getting ill – followed by several weeks travelling independently around the region.

We had several entertaining letters from him in the volunteering part of the trip, then only a couple of (slightly troubling) phone calls from Mexico, parental anxiety set in….But, not only did he come back safely, he had the wherewithal to buy this charming cactus-antlered, deer-like souvenir for us in Oaxaca. He wasn’t certain about their origin, but had understood they were a traditional craft in the region and had some connection to Mexican myths.

It’s not specifically a Christmas decoration and lives on a shelf in the living room all year, but the colouring is thoroughly winter-festive and so s/he joins the throng of treasured items that come out each December (some featured in related posts) that parade along the mantelpiece, and they all get along fine!

Subsequent internet image searching led to some information which offered some clues to their origin, and what they were called. Once I’d discovered a possible name for them I learned about a 30 year old maker of traditional papier-mâché figurines in Mexico City in the 1930s called Pedro Linares who became ill:

Not having access to medical attention, he laid in bed and lost consciousness. Linares dreamt of a bizarre, peaceful place that resembled a forest. He recounted seeing giant rocks, tall trees, and an expansive sky. The artist felt remarkably healthy again. His physical pain was gone and he felt happy as he walked along trails through the dense foliage of his dreamworld.

Suddenly, the clouds, rocks, and trees began to transform. The land features around him shaped themselves into animals that were familiar and yet like nothing Linares had ever seen before. There were mules with dragonfly wings, roosters with antlers, creatures that resembled gryphons and dragons, just to name a few. They had unnatural colors and patterns swirling over their bodies. These creatures began repeatedly chanting a single word: alebrije…alebrije …alebrije! Linares became fearful of these strange, powerful creatures chanting this nonsense word. He couldn’t tell if they were warning or threatening him. However, it was enough to startle him awake in time for his fever to subside.

He began to make figures from papier-mâché based on these dream visions which were admired by well-known artists including Diego Rivera and Frida Kahlo. The design ideas were taken up later, in the 1980s, by traditional wood carvers in the Oaxaca region, using the light but durable timber from a local tree called copal, easily carved when green.

Since writing this section above I saw a TV programme  ‘Hand Made in Mexico’ that featured an artist whose family have carved and painted animal creatures called Alebrijes for generations, they looked very similar to our figure. His explanation was that they were part of his native Zapotec tradition and were spirit animals that accompany you through life – every child is assigned a creature at birth determined by the day of the month they were born. The carved figures are brightly painted with symbolic patterns often representing aspects of landscape. Further explanations about Alebrijes can be found here.

Either, or both of these stories could account for the origin of our little sculpture who is made from wood and has the name Cornelio Ortego painted underneath. I can’t find anything about this person but thank them from afar! The creature reminds me in some ways of the Forest Spirit in the fantastic Studio Ghibli animation, Princess Mononoke, from yet another continent.

It seems astonishing and pleasing to have this exotic and joyous creature derived either from an ancient tradition or someone’s vision of another world, and selected as a gift by our son (who perhaps experienced a few visions of his own in a world new to him) then carried back, undamaged, in a rucksack from half way round the planet to our home. 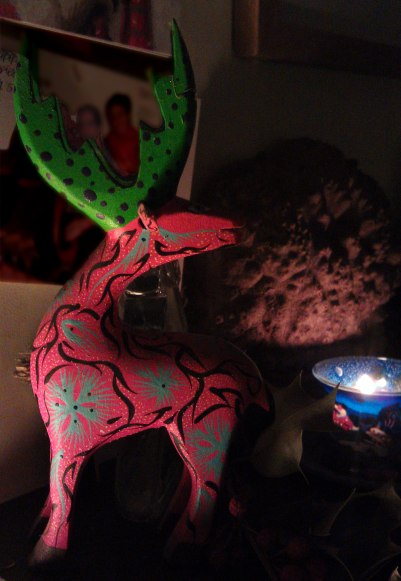